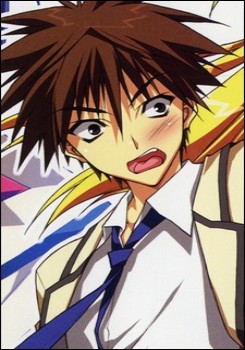 The series' main Protagonist. A sixteen year old male virgin studying at Kyuugetsu Academy. He's a perverted boy who loves to crack lewd jokes. He enjoys collecting rare juice cans and basically likes juices. One day, he bought a melon soda that transformed into a girl, which was an Akikan. He was later invited by Hidehiko Otoya to join the "Akikan Elect" and "Intelligence Port Project" but being a person who hated fights, he rejected the invitation (although he was later forced to participate). Later, he made his mind to crush the projects together with his comrades. A certain incident during his sophomore/junior high school days made him afraid of hurting somebody. Later on, he will also be the owner of Shiruko, who is another Akikan.