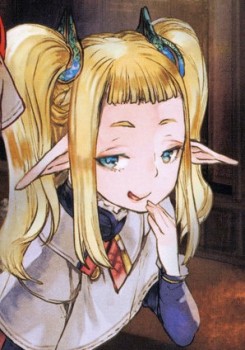 Known as Okazaki Kanami, she was the homeroom teacher nicknamed as "Oka-chan" by her students. As a reincarnator she's the daughter of the elf village's leader Potimas Harrifenas and maintains her weird tastes such as spiders, talk with a manga accent and fake a lazy personality.
In the very moment she was reincarnated the only thing she could think was in her students and spend every day on her life trying to gather the students, after telling everything to Potimas he accept to help her in that mission.
After she meet with Shun and Katia, Oka told them to go to the academy with her to meet with other classmates.

Her birth Skill is called "Teacher's attendance list" this skill allows her to know the state of all students, how they'll die and how much time the had.

She's the second character with the smallest breast in the series.