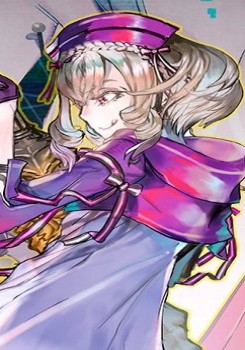 Negishi Akiko was the student with the worst life on Earth having a very weak and ugly body, crooked teeth and a cardiac disease that made her weak on mornings because of this she was bullied on junior high school and latter on High school given the nickname "Rihoko" for Real Horror Kid.
Her new life started as a complete opposite to the previous one, beautiful body and rich family but with one fatal flaw, she was a vampire even if both parent were humans. Vampire is a race that is neither human nor demon but both races has marked vampires as a race that must be destroy.
After her parent were killed and her village destroyed by a religious war she's saved by Kumo and Ariel and Sophia decide to go with them and Merazphis to the demon country.
During the journey to the demon country Sophia is forced to do an infernal training by Kumo in order to survive in her future.
After their journey Sophia became a brutish fighter to the point of being called battle junkie.

Her birth skill is called "True ancestor" which gives Sophia a stats bonus from drinking blood and eliminate all her vampire weaknesses such as fire or sunlight.