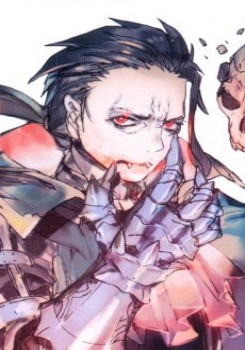 Has work in Sophia's family since he was a child, Merazophis grew together with Sophia's mother and with the time he started to love her. Even when Sophia's mother was already married Merazophis stayed at her side, Sophia's father was aware of this but he still trusted Merazphis. Merazophis was too loyal to do something that would make his loved one suffer.
After an encounter with bandits that ended with only Mera wounded he start to train everyday to be prepared for the next time.
Just before Sophia's parent deaths they trusted Sophia to him not much later Mera was turned into a vampire by Sophia to save his life and later saved by Kumo and Ariel.
During the travel with Sophia Merazophis endured the same training but he was still weaker than Sophia at the end of the journey. Even after reaching the demon coutry Mera continued the training everyday until he was powerful enough to be the commander of the fourth demon army.