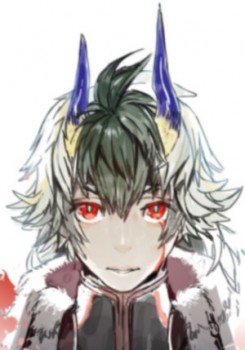 Kyouya was one of Shun's friends in his past life, Kyouya enjoyed playing with Shun and Kanata online sometime all night. Kyouya was reincarnated as a goblin on Magic Mountain as Razraz there he understood how goblins in this world are very different from what he remembered from videogames.

As a goblin he had 4 older brothers, 5 older sisters, 1 youger sister and 1 youger brother, in the goblin society there was nothing more valued than family and every member had a job to do, in Razraz case was farming but the night he activated his unique skill razraz job changed to blacksmith.
Razraz was respected by all the village until one night, humans destroyed the village and a human tammer known as "Buirims" forced Razraz to kill and eat his little sister.

After that day Razraz was the blacksmith of humans until the night when he could unleash all his wrath. Later in the story now known as Wrath he became the commander of the Eighth demon army.

Wrath's birth skill is called "Weapon creation" and allows the user to create weapons usign MP, The quality of the created weapon depends on the skill level and the consumption of MP.