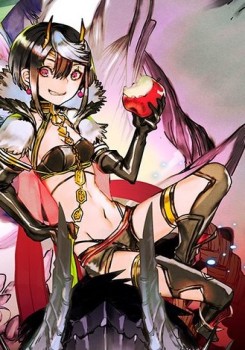 Ariel or better known as the Demon King is the most powerful being inside the system with all her stats on 90,000 as average and the oldest person alive due to she saw the creation of the system more than 6,000 years ago.
After a fight with Kumoko half of Ariel's soul was destroyed and replaced with one of Kumoko's parallel wills.

Initially she was full of hate and desire for revenge to humans but after the soul absorption Ariel became easy-going and cheerful person however this is only in the surface deep inside she still has hatred towards humanity.

Ariel was created by Potimas, but later abandoned as a failed product then raised by the goddess Sariel in her orphanage. Ariel's body was weak for the poison his body produce and leaks to her veins being in bed most of the day.

After the system was created she obtained poison immunity and made a vow to live the rest of her days searching a way to save Sariel.

Ariel is the "Original Taratect" and the Sariera religion reverence her as one of the divine beast who helped the goddess.

The third character with the smallest breast