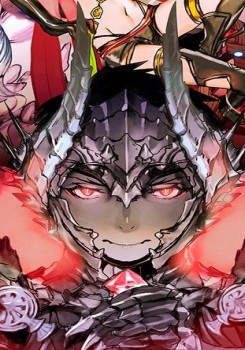 One of the administrator of the system and a true dragon, usually referred as Kuro he maintains the system safe from every danger in most cases he's traveling around the world searching and destroying research facilities from before the system.
He's a very indecisive but calm person, but unfortunately when he made a choice it usually ends with the worst scenario.

Before the system he hated humans but his meeting with Sariel changed his mind, after that momento Kuro start to have feeling for Sariel to the point that even thousands of years after Sariel's sacrifice Kuro follows her ideology of protect humans.

The few people who know his existence are Ariel, Potimas and Dustin the pope, Kuro has a good relationship with the latter often drinking together. But in other hand Kuro is in a cold war with Ariel who thinks that Kuro is useless and coward for not protecting Sariel.