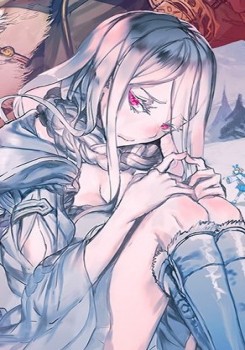 Commander of the Tenth Demon Army.

After Kumoko reach apotheosis she became a god with a completely white body, she can still transform into Arachne form but decide to stay as human to be unnoticed in cities. The only aspect that remains from her spider body are the four pupils she has in each eye.

Shiro loves to eat delicious food and sweets but also loves alcoholic drinks, and when she's drunk Shiro became the most dangerous being in the planet because she's very aggressive such as eating parts of (or whole) baby Sophia. Unlike her usual self drunk Shiro is very open and love to talk about everything.

She lose all her stats and skills after apotheosis but gains the ability to use "Real magic" which is far more powerful and became immune to all attacks from the system, in other words only other god can harm her now.

When she find a way to travel to Earth again Shiro meets with D discovering that she was all the time a spider and her memories were fake ones implanted by D, and D being all this time the real "Wakaba Hiro".

After the travel with Ariel, Sophia and Mera, Shiro agrees to help Ariel to save Sariel from the Nexus of the system, but not because D forced Shiro to do so instead Shiro developed a real friendship with Ariel who is her first friend.

Other people apart from Ariel that Shiro sees as friend is Wrath; Sophia is useful to Shiro but only that Shiro doesn't care if Sophia survives or not.

Shiro has the third biggest breasts of all characters, after Sophia and Katia.