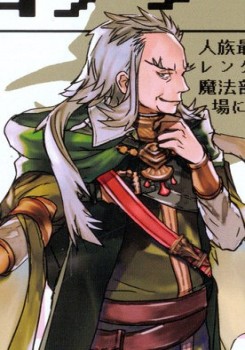 The most powerful mage on the Renxandt Empire and teacher of Julius.
Ronandt is a close friend with the "Sword Emperor" the ruler of the Empire and his desire for power was the only way he could stay at the Emperor side, that gave Ronandt an obsession with magic and a superiority complex.

One day he, a monster tammer named "Buirims" and other 30 knights were send to the Elro Great Labyrinth to hunt a spider monster that was causing troubles, this was a point of change in Ronandt's life the squad wasn't only massacred that monster was using magic in a way Ronandt never thought it was posible.

Many years later Ronandt came back to the labyrinth to find the same monster who was named "The Nightmare of the labyrinth" if that mosnter was intelligent enough to use magic in that way it was likely that Ronandt could communicate with it. Ronandt found it and started to copy it's training doing this without rest Ronandt became the most powerful mage in the history.

After even more years when Ronandt was a teacher himself and the rumours that the Nightmare was dead started to rise he became more humble but at the same time pessimistic knowing that no matter what he tried that monster would be ever be more skilled than him.